» News » A tribute to Gloria Pannka

A tribute to Gloria Pannka 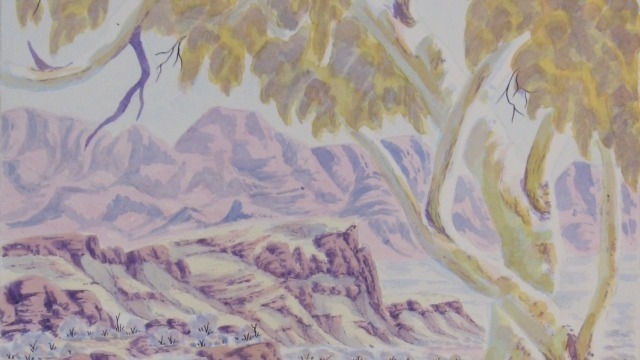 The ANU School of Art & Design was greatly saddened to hear of the passing of Gloria Pannka, leading artist, Namatjira Legacy Trust board member and friend of our School.

Gloria was one of the founding board members of the Namatjira Legacy Trust, instrumental with her cousins in working with Big hART to establish its foundations and to launch it. Gloria was central to the social justice campaign for the copyright to be returned the Namatjira family, a warrior woman, who worked so hard for the historic victory. The Namatjira Legacy Trust say “we couldn’t have done it without her sheer determination and her tireless efforts to speak at every event – to TV, radio, newspapers, to Ministers and government officials, in Parliament House Canberra and at exhibition openings around the country. At times she grew weary of always having to face the public, but time and again, she did it anyway - because of her deep commitment to justice for her family, pride in her family’s iconic, important story, and always for the next generations of family that deserved better.”
Gloria was a master watercolour artist, carving out a career for herself in the footsteps of her father and grandfather, creating spectacular, mesmerising paintings of her Country. A second-generation Hermannsburg School watercolour artist, her father Claude Pannka was one of the original artists in the school. Like his contemporary Albert Namatjira, Claude developed an interest in painting when artist Rex Battarbee visited Hermannsburg in 1934. By 1950 Claude was painting full time and had become a highly sought-after artist. He taught Gloria to paint with watercolours when she was a young girl, and she proudly carried forward the tradition to the best of her ability all the way to the end of her life – a life-long dedication to telling her family’s story to the world, and to teaching her peers and younger generations.As part of the Big hART Namatjira Project, with other senior artists, she would take Ntaria (Hermannsburg) school students out of the classroom to different places on Western Aranda Country. She would tell stories and pass on painting techniques, magically bringing calm and focus to groups of otherwise excitable school students. She also worked on multi-generational, multilingual and multimedia artistic projects with the Ntaria students, including On Country in 2013 – an award-winning collaborative watercolour digital animation - and the “Namatjira Legacy Trust” iTalk animation in 2016, which she co-wrote and starred in as a cartoon character animated by the students (link below). Her paintings were the backdrops for each scene and the script was recorded in both Western Aranda and English. She co-facilitated artistic and Aranda literacy and translation workshops with the students in the creation of these works.In 2014 Gloria accompanied students to Parliament House Canberra for the exhibition Namatjira to Now, showcasing the work of 5 generations of watercolour artists since old Albert. She supported the students to speak up on the national stage about the significance of their Western Aranda watercolour movement in the art history of this country.Between 2010 and 2017 she travelled the country with the Namatjira theatre show and documentary, standing proudly on theatre stages chalk drawing her Grandfather’s Country and story, delivering watercolour masterclasses to the general public and participating in post screening Q&A sessions.

Gloria was a visiting artist to the ANU School of Art & Design in 2017, and created new works together with artist Lenie Namatjira in the Printmedia and Drawing Workshop for an exhibition held in the Photospace, Pmara Nurnakanha Parta-Kurta: Our Place With Hills, learn more.Gloria touched people across this continent – her artworks are ongoing testament to that, cherished in galleries and homes here and internationally.**