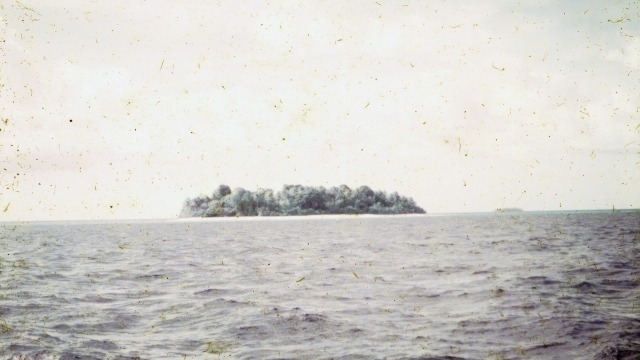 Echoing the illusion of parallel lines at their vanishing point, the exhibition considers the island as a concept where opposing ideas converge — contained yet contingent, real yet imagined, the political and the personal.

Coexisting as a haven from the prevailing paradigm of the ‘mainland’, and a sovereign territory of containment, the island is a construct of time and space that exists outside of the ‘real world’. The works in Vanishing Point aim to cast light upon the liminal territory that exists between the dualities inherent in the island. Each of the five artists in this culturally diverse group references the photographic or utilizes the lens in production, and it is through this apparatus that the island is viewed. Through the telescopic capabilities of the lens, the artists draw close and pull back, oscillating their vision from detail to whole - from proximal examinations of the socio/political island state, to distant explorations that address the island as a repository for longing and illusion. From these multiple viewpoints the works move towards a collective mapping of the island concept that reveals compelling conversations about identity, vision and space.

A previous iteration of Vanishing Point was presented at Hazelhurst Regional Gallery and Arts Centre (2018).

Consuelo Cavaniglia is a cross-disciplinary artist whose work focuses on how we see and understand space. Her work often employs subtle visual illusions to unsettle our sense of space and suggest instability and uncertainty within the structures that we inhabit.

Ellen Dahl is a Sydney based, Norwegian born artist working across photography, video, sound and projection. Often with the landscape as an entry point, her practice traces the intersection of memory and identity with a physical, political or psychological sense of place.

Yvette Hamilton is a lens-based artist whose practice takes an exploratory approach to vision and visuality, specifically in relation to the photography – from historical optical devices to dematerialised digital forms.

Interdisciplinary artist Taloi Havini works across ceramics, photography, video and mixed media installation. Havini was raised in the Autonomous Region of Bougainville where islands are firmly part of Havini’s consciousness. On a recent trip back to Bougainville she discovered a collection of severely deteriorated Kodachrome slides from her parent’s archive. Seeing them evoked ideas of island life in the tropics during the ‘60s and ‘70s, some depicting the very places where she was raised in the 80s.

Salote Tawale is a multidisciplinary artist working in performance installation. Cultural identity is a  focus in her artwork. Foregrounding the experience of a translocated Indigeneity, the condition of Tawale’s practice is one that is removed from land and separated from traditional practices, and, consequently repositioned within immigrant histories.