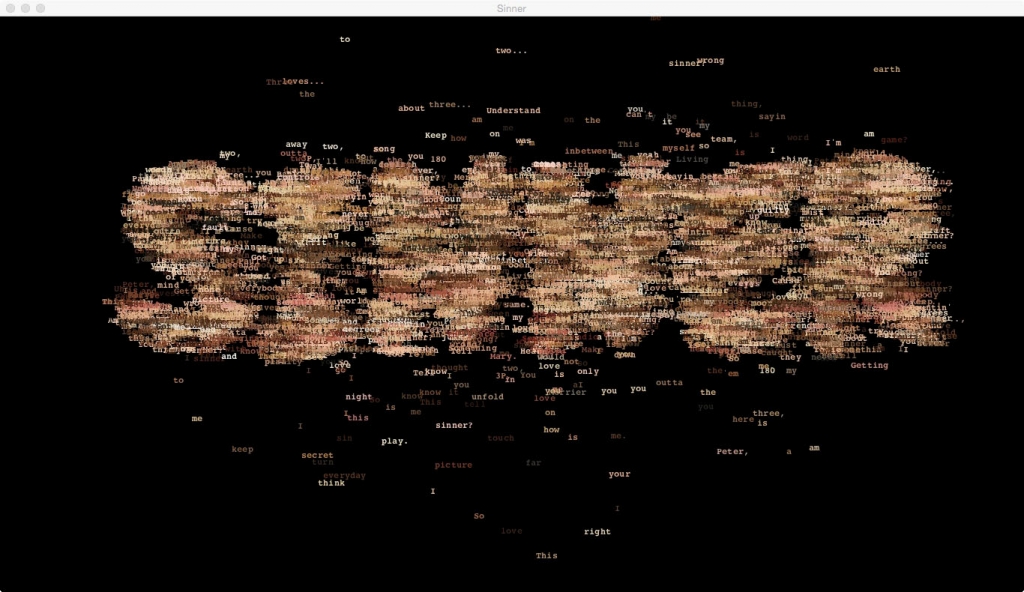 Beginning in the 1960s, conceptual artists sought to reorient art by exploring and experimenting with the complex relationships between art and language, word and image, and systems of meaning. Dr Baker Finch’s art practice involves photography and computer-related media, a principal theme of his research being the operation of text and language as pictorial elements. In collaboration with Prof. Jane Simpson in the School of Literature, Languages and Linguistics, College of Arts and Social Sciences, he will explore pictorial uses of written representations of languages, both with respect to different scripts, and with respect to spoken and signed languages. The project intersects with emerging specialisations in data visualisation and digital humanities at ANU. 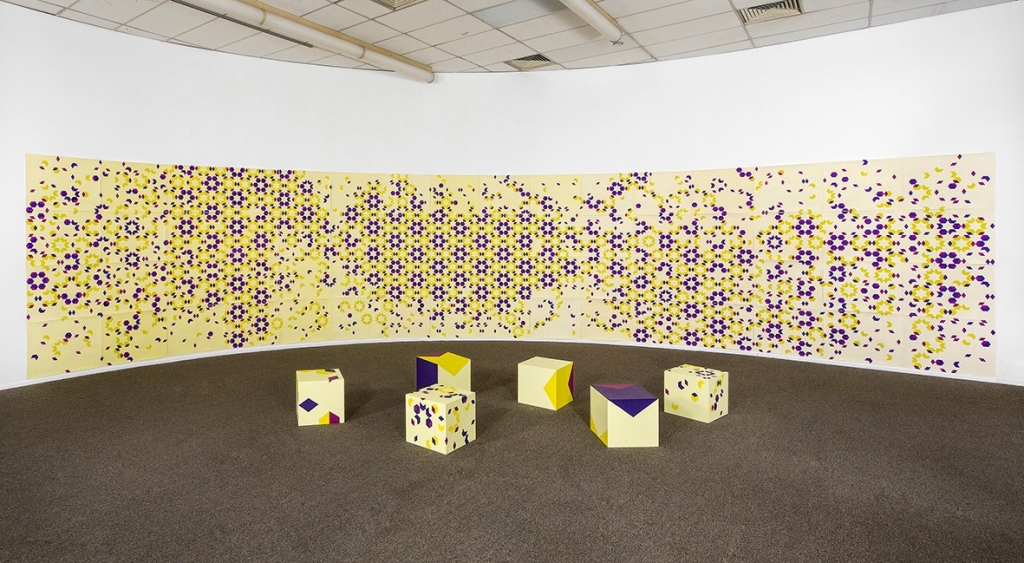 Mathematics and painting share a common goal in describing and making manifest observed and imaginary forms. Susan Buret will investigate the expression of the underlying structure of natural objects in painting and textiles, in collaboration with Dr Vanessa Robins, Research Fellow in Applied Mathematics, in the Research School of Physics and Engineering. Through computer modelling, patterns previously not visible to the naked eye can now be expressed in diagrams and three dimensional printed objects. Susan will explore their expression further in her studio research by investigating how systemically generated knowledge can be added to the intuitive, handmade and materially specific techniques used in studio investigations of pattern. The starting point of the research will be phylotaxis, the spiralling structure seen in succulents that often appears in the Pueblo ceramics of New Mexico. In addition, the relationship between the gridded supports for needlepoint and latch hooked works in textile work and mathematical research into smoothing of digital ‘edges’ digital, pixelated forms will be explored. 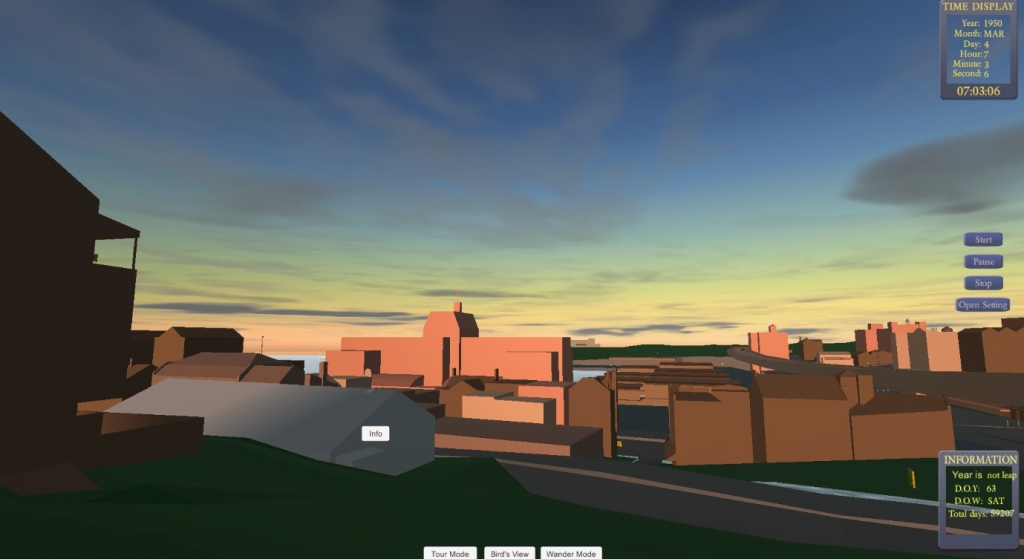 The visualisation of objects and environments in museum display is liminal. It exists at the boundary of knowledge and interpretation where the definite facts are combined with the best guesses of experts to create a possible might-have-been for public edification. Using fragmentary evidence, informed speculation and a degree of poetic licence to recreate the past according to the theories of the day, museum visualisations reveal as much about the time they are made as they do about the past. Kit Devine will explore a fundamental question in contemporary museum display: what are acceptable levels of interpretation and poetic licence in heritage virtual reality (VR)? Head-mounted VR is a deeply phenomenological and experiential experience. Given the profoundly immersive experience of VR, are audiences more likely to think that this was how it was, not how it might have been? Kit will collaborate with Dr Ben Swift, Computer Science, College of Engineering & Computer Science, and Professor Laurajane Smith in Archaeology and Anthropology. 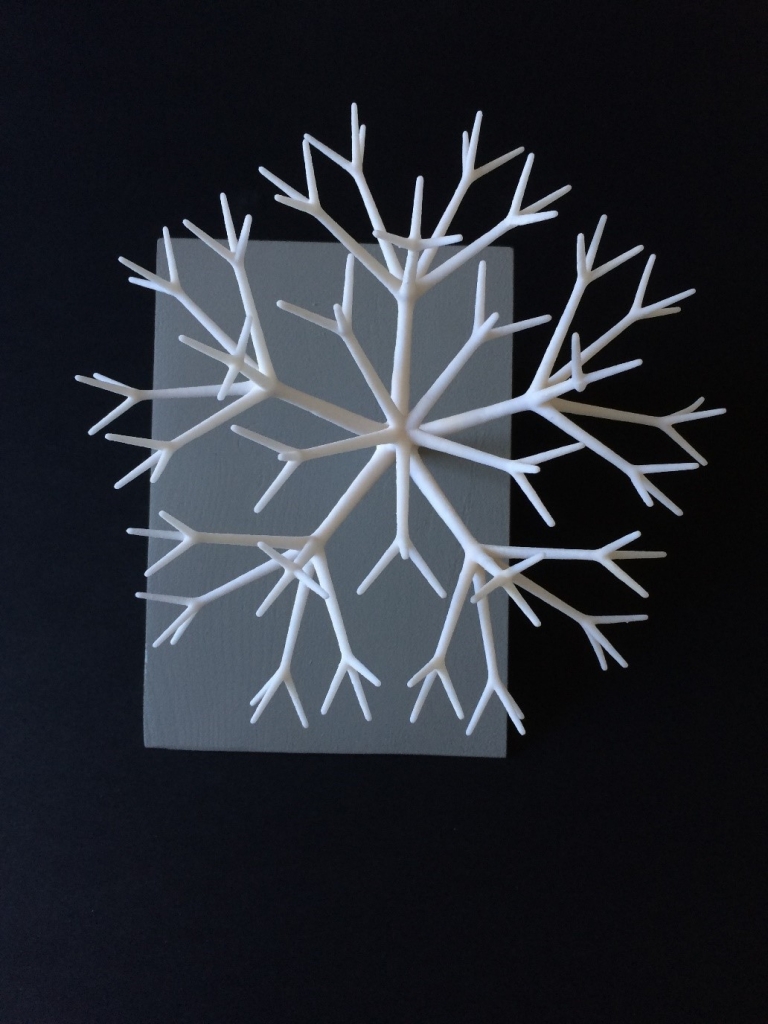 Coral reefs are the largest structures of biological origin on earth. Alexandra Gillespie will research the architecture of marine invertebrate colonies and the deeper mathematical structures underlying their formation and that of the greater interconnected physical world. Coral reef systems protect coastlines and in turn protect human habitation, along the coast; both types of colonies are under threat as a result of climate change and increasing sea temperatures. Displacement of both human and animal colonies will occur in turn. Alexandra will collaborate with Dr Vanessa Robins, a Fellow of the Department of Applied Mathematics to model a series of branching structures (L systems) and Dr Levi Beeching at the Research School of Physics and Engineering (RSPE) to 3D scan coral samples from the Great Barrier Reef. This collaboration will support the development of sculptural works relating to distortions of geometrical cell structures on curved surfaces in coral. 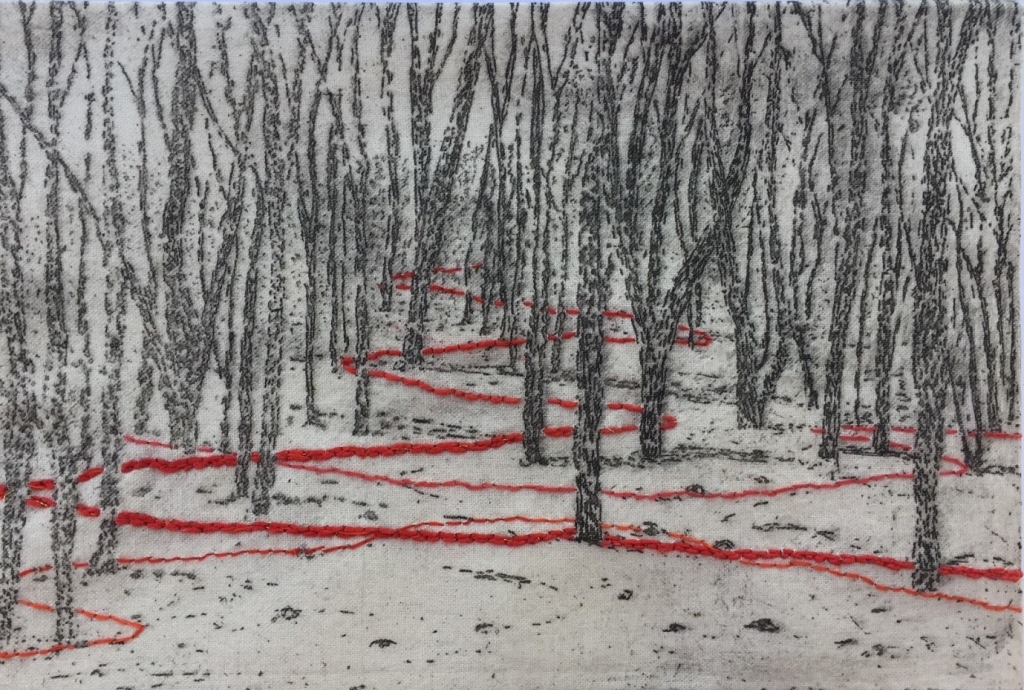 Michelle Hallinan’s research project will involve observation of scientific procedures and equipment used in the laboratory and in the field by scientists who specialise in geomorphology—the study of landscapes. Lake George will be the focus of research collaboration with Prof. Brad Pillans from the Research School of Earth Sciences. Both researchers share an interest in landscape of Lake George, in particular, the dramatic contrast between the flat lake bed and the steep fault scarp on the west side of the lake. Documentation of the process would include observational sketches, photographs and reflective commentary of the collaborative and creative processes. This research would inform the making of a series of artist books consisting of etchings, lithographs and/or drawings that reaffirm and inspire for the viewer a deeper and more nuanced appreciation of the geology of Lake George. 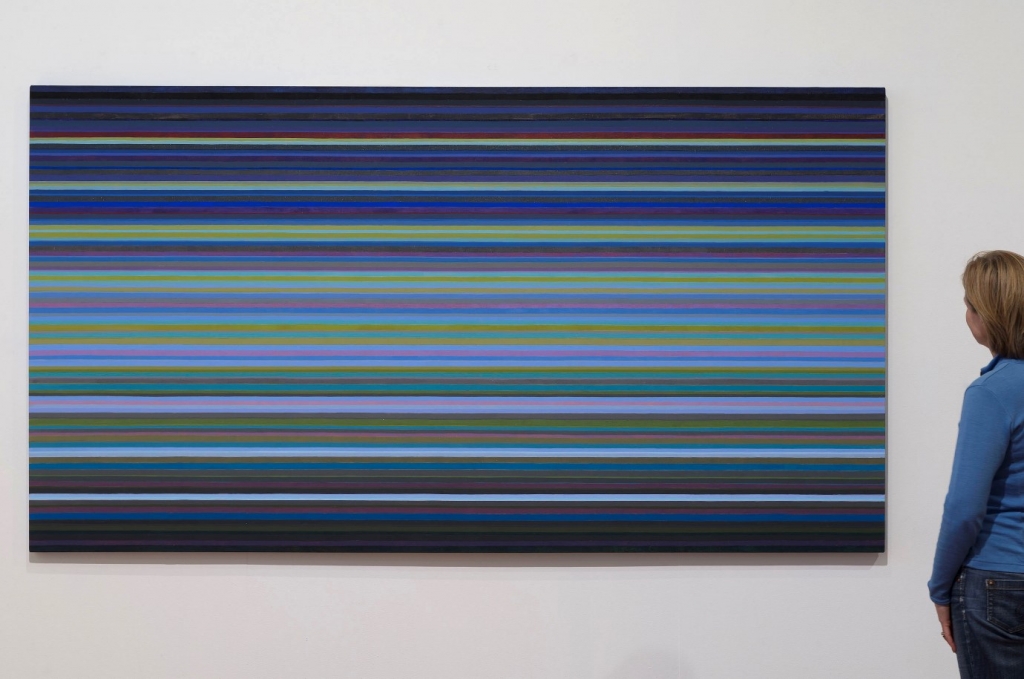 Ella Whateley will collaborate with Dr Peter Riggs, Visiting Fellow in the College of Physical and Mathematical Sciences. Together, a painter and a physicist/philosopher of science will focus on the perception of duration as one of the key components of temporal perception. An enquiry into the phenomenology of time (how the viewer experiences time and how it is connected to the embodied self) will be combined with the study of the science of time (its perception, from cognitive science all the way to physics) through the capacity of painting to mediate alternate readings of the body in space. The perception of time is not experienced uniformly; our perception of duration is influenced by emotion, specifically emotion that has been stimulated by what we see, including colour, light and tone. This project will explore how abstract painting might contribute to an enquiry of the perception of time, specifically duration, by making works that explore the extent to which colour and tone can affect and are affected by perceptions of duration through their relationship to the emotional responses they engender.