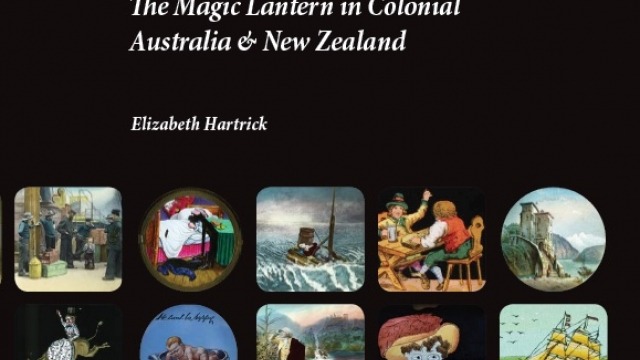 The Magic Lantern in Colonial Australia and New Zealand

By Elizabeth Hartrick (University of Melbourne)

In a world awash with visual technologies, the curiously named magic lantern – the optical lantern or optical projector – and its fragile glass lantern slides has become largely invisible. Yet this powerful visual medium thrilled audiences around the world with sights, sounds and spectacle on the big screen long before the invention of the cinema.

This book brings to life the story of the magic lantern in colonial Australia and New Zealand. It describes the extraordinarily wide use of magic lantern images and technology across the colonies.

The medium’s repertoire was practically without limits: images were as likely to be culled from the canon of western high art as from a medical textbook or popular sentimental ballads and moral tales, and they ranged in aim from family amusement to serious instruction, religious evangelism and political and commercial promotion.

Lantern images were enjoyed by the social and cultural elite and middle and lower socio-economic audiences alike, in cities, country towns and hamlets. The medium lent itself popularly and easily to vulgar jokes, sensational presentations and sober demonstrations of scientific advances or lectures on history and geography.