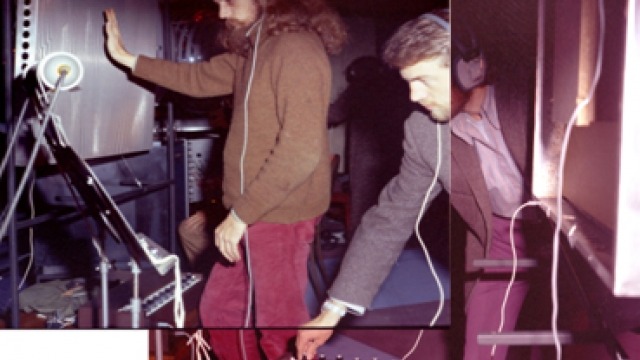 Theremins being performed in Canberra in 1975 at the landmark ANU event Computers and Electronics in the Arts.

To celebrate UNESCO’s World Day for Audio Visual Media the ANU School of Art presents an evening of Revenant Media, two important events bringing old media back to life in a new context. In Theremin ’75 a pioneering piece of Australian new media, Stanislaus Ostoja-Kotkowski’s theremin of 1975, will be played again.

In 1975 the pioneering Australian new media artist Stanislaus Ostoja-Kotkowski designed and built two theremins — the well-known electronic instrument whose distinctive sound is familiar from science fiction movies — for the ANU’s landmark Computers and Electronics in the Arts event, which was part of Canberra’s Australia 75 Festival of the Creative Arts and Sciences. This project recognizes this historic event as part of the ANU School of Art’s Canberra Centenary program. The theremins featured large stainless steel ‘interactive paintings’ as aerials, and performed a work especially commissioned from the composer Professor Larry Sitsky of the ANU School of Music. They were thought lost until one of the aerials was found discarded in an ANU rubbish skip and was taken into the ANU Art Collection. Now, with the support of the School of Art, the Research School of Humanities and the Arts, the Research School of Computer Science and the Research School of Engineering, the electronic components of the rescued theremin have been rebuilt by the historian of Australian electronic media, Dr Stephen Jones, in collaboration with Alistair Riddell from the ANU School of Art, and it is ready to be played once more. After thirty-eight years of silence it will be launched by Professor John Hosking, Dean of the College of Engineering and Computer Science, at the School of Art Gallery, just before the World Day for Audiovisual Heritage on October 27. Professor Sitsky’s original composition, The Legions of Asmodeus, will be re-performed by the contemporary electronic musician and percussionist Charles Martin, supported by computer artists Alistair Riddell and Ben Swift. All welcome.