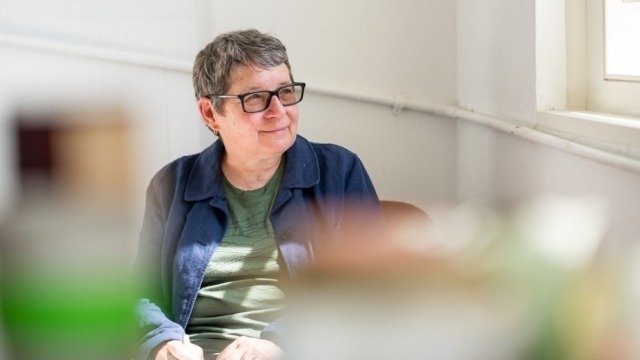 Shining a spotlight on the representation of Aboriginal histories, Tasmanian artist, writer and curator Dr Julie Gough, a Trawlwoolway woman, draws on her Aboriginal ancestry and her family's experiences as Tasmanian Aboriginal people to highlight untold and often conflicting histories of Australia's colonial past.

Utilising the creative mediums of sound, film and sculpture, Gough's work is grounded in archival research and is deep-rooted in her connection to Country. Her work has been displayed in galleries across the country, and now she'll look to broaden her creative horizons as one of the new HC Coombs Creative Arts Fellows to take up residency at The Australian National University (ANU) in 2022.

Gough will use her time at the ANU School of Art and Design to carry out research by tapping into the University's archives, with hopes of inspiring new ideas and creative outcomes.

"I am mostly interested in learning, understanding and sharing what happened during the first 50 years post colonisation across Tasmania, and those evidential documents, such as records and artworks, can be found in often unexpected locations and collections," Gough says.

"During my time at ANU I plan to undertake some printmaking and writing, and in particular I will look to tackle a book chapter about Tasmanian Aboriginal children who lived with Van Diemonian colonists prior to 1850, a project of mine that's been on hold since 2018. So, I'm very pleased to be given the time and creative space to work on this."

Living in the nation's capital has its perks, and Gough is especially excited to make the most of all Canberra has to offer.

"It is extremely exciting to be in Canberra for more than a night or two at a time, especially coming from Tasmania, where mainland Australia often seems like an international destination," she says.

"As both a maker and a researcher, the collections in the national institutions, which are on the University's doorstep, will definitely be a catalyst for future artistic work."

Fellow HC Coombs Creative Arts recipient, Australian pianist and composer Andrea Keller, who has a keen interest in jazz music and the art of improvisation, is relishing the opportunity to collaborate with other musicians at ANU.

"As an improvising musician and composer, my creative energy is largely devoted to devising ideas and materials that fuel and foster collaborative experiences between musicians. I've been spending my time creating and refining materials, as well as both forming new collaborations and consolidating existing ones," Keller says.

"I've been really inspired by the collaborations I've been undertaking at ANU. The main one being the formation of a new trio with saxophonist John Mackey and trumpeter Miroslav Bukovsky.

"I've known both musicians for a long time but having the chance to compose music for the three of us to realise together, and having regular opportunities to rehearse, perform and record using the ANU School of Music facilities, has only been possible thanks to the HC Coombs Fellowship.

"My hope is that the many musical relationships, new repertoire and recordings I've created as part of this fellowship will impact well into the future, including planned commercial releases and performance opportunities broader afield."

Keller is also enjoying interacting with ANU students and the broader music community in Canberra, which she says has been a rewarding experience.

"From playing and recording my music with a student ensemble to giving individual lessons on piano, as well as one-off lectures, the open-mindedness, energy and enthusiasm that the students bring makes for meaningful exchanges that feed and inspire me," she says.

"I've met many wonderful musicians of all ages and stages, who work in different musical areas, but all possess an eagerness to connect and engage in new musical experiences. The building of these networks is a critical part of what I do, not just from a business perspective, but mainly from a personal and artistic standpoint."

As part of her Fellowship, Keller has already recorded a major project and has produced a significant body of new music, which has been performed by ANU staff and students. She will also give a public lecture at the University next year.

A renowned musician with multiple awards to her name, including three ARIA Awards, Keller runs an educational workshop known as Gender Defying Jazz, a program that aims to provide a safe and inclusive space for female identifying, transgender and non-binary musicians interested in exploring jazz and improvisation. Keller is also Head of Jazz and Improvisation at the Melbourne Conservatorium of Music at the University of Melbourne.

She is especially looking forward to engaging in a period of uninterrupted creative work while in residence at ANU.

"With a history of Fellows such as Judith Wright, Arthur Boyd, Don Banks, and Don Burrows, I was really honoured to be invited into this opportunity," she says.

"It really is such a rare and meaningful gift, to be offered time, space and resources to devote to the creation of new work and research."

2022 marks the first time since the start of the COVID-19 pandemic that ANU HC Coombs Fellows have been able to immerse themselves in campus life full-time and without disruption, following three years of restrictions.

The HC Coombs Creative Arts Fellowship was established in 1964 at the instigation of Dr HC Coombs, ANU Pro-Chancellor at the time, to ensure the creative arts in Australia flourish.