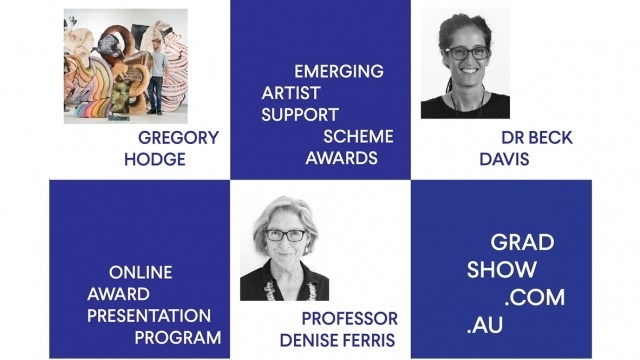 The Emerging Artists Support Scheme (EASS) is unique to the SOA&D and has been operating for over thirty years. Through this scheme patrons can award prizes, scholarships and commissions, and acquire artworks for their collections. Our School greatly appreciates this support from the ACT community.

The opportunities presented through EASS can often lead to career changing outcomes for our Graduates. Awards alone do not lead to success, but these awards can make a difference.

Such generous sponsorship from individuals, families, local business, and corporate sector and arts organisations represents assistance for graduating artists when it is most valuable – at the beginning of their independent studio practice. The scheme plays a significant role in encouraging emerging practitioners to remain in the region, and residencies and exhibition opportunities offered by local arts organisations play a key role in building Canberra’s wealth of practising artists.

The School of Art & Design thank all of our supporters who make these awards possible.

With thanks to Patron Cecile Galiazzo, Altenburg & Co

This is a new award for 2020, generously made possible by Saskia Morris and John Debs from ANU Makerspace.

Solo exhibition at ANCA Gallery in 2021

Exhibition at Textile Works Gallery and artist talk in February 2021, one year membership of Canberra Spinners & Weavers, $50 discount on one of CSW workshops in 2021.